I sat for a Glamour Shots session when I was around 13. Not my idea, but I suppose I went gamely went along with it, even with a mouthful of braces. I look back at those photos now and cringe-laugh at the absurdity of it all – the hackneyed poses, way-too-adult makeup, and elaborate half-costumes that really drove home the caricature of it all.

What was this an exercise in? I think I wondered that at the time, too. What reality was this representing? Whose fantasy was I? This politics of representation, I came to understand, far predates my mother’s insistence on “pretty pageant pictures” and goes back centuries. 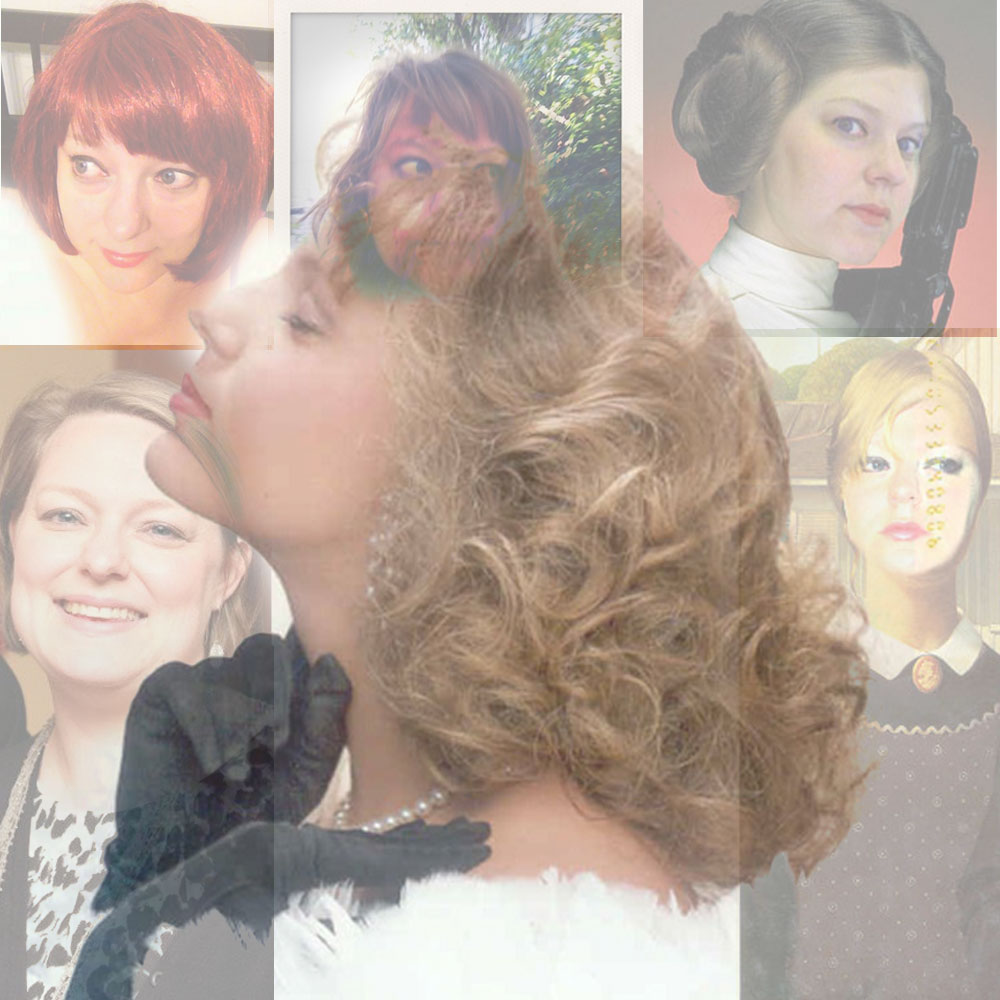 Art, images, photographs, yes, even Glamour Shots: All are saturated with meaning. We look at who created a work of art, but unless we are serious students of art and rhetoric, we often don’t examine beyond that name to learn about the audience, the patronage, the model (if she can be known at all), or the historical context. Ideologies are embedded in these works, and from them we can ascertain the distinct whiff of patriarchal dominance, the mark of the ruling class, the stain of wealth.

My mother didn’t just want pretty pictures of me to hang in the hallway or to show off in her wallet gallery of 3x5s. Or maybe she did. But why? Because she had thought it her duty to perpetuate the ideology of female beauty that has been ingrained in our collective consciousness.

Of course, these photos weren’t exactly high works of art. But who can blame my mother for wanting decent pictures of her daughter? I want to always see me at my best, present myself to others in the most flattering light possible. What is the self-image I want made public?

I wanted to explore these issues of photography and female identity through a more personal lens. Why it is I sometimes feel that compulsion to put my best face forward and create this idealized self-image that Van Dijck describes, while at other times I actively rebel against the notion.

First, it helps to consider how I got to this point – what ideas have persisted over time and why, how the male gaze influences the female one, the transition from the aura of uniqueness to the inevitable spectacle, the public sphere of social sharing, and finally, the creative/destructive nature of identity through images.

Karl Marx and Friedrich Engels asserted that those who have the means of material production controlled the ideas in a culture. The wealthy and powerful, then, propagated images made in their image. This was typically a patriarchal ruling class. We see in painting after painting their perspective, their lives, their ideas. Societal divisions (gender and economic) were reinforced through such art, which was cordoned off from the uneducated common people. “The class which has the means of material production at its disposal, has control at the same time over the means of mental production” (Karl Marx and Friedrich Engels)

Artists weren’t always as rebellious as the Dadaists. As Max Horkheimer and Theodor W. Adorna point out in The Culture Industry, “the artists who succumb to ideology are precisely those who conceal this contradiction instead of assimilating it into the consciousness of their own production.” John Berger relates the example of Frans Hals, whose last works of haughty governesses and smarmy governors prove the exception, not the rule, when it came to art. 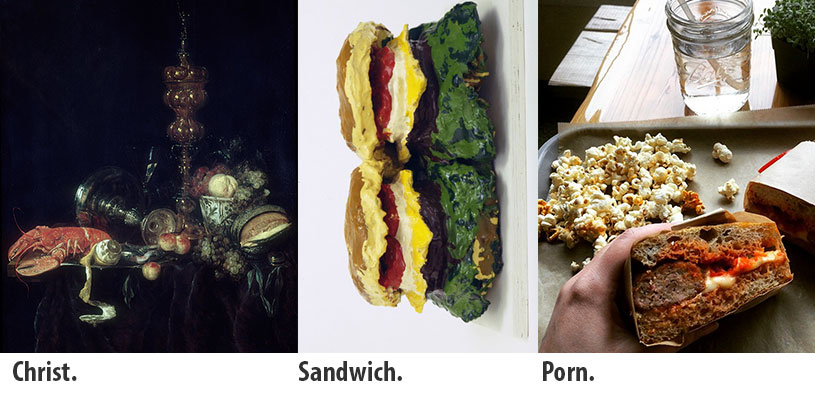 Even when art was predominantly religious in nature, the male gaze fixated on the female as an object. Laura Mulvey lays it out pretty plainly in her essay “Visual Pleasure and the Narrative Cinema,” although she was referring primarily to film:

This is why, at malls across the United States in the early ’90s, women paid hundreds of dollars for an hour-long session of dress-up and soft-focus photos, so they could be objects of desire for a select audience of voyeurs, the male gazers. 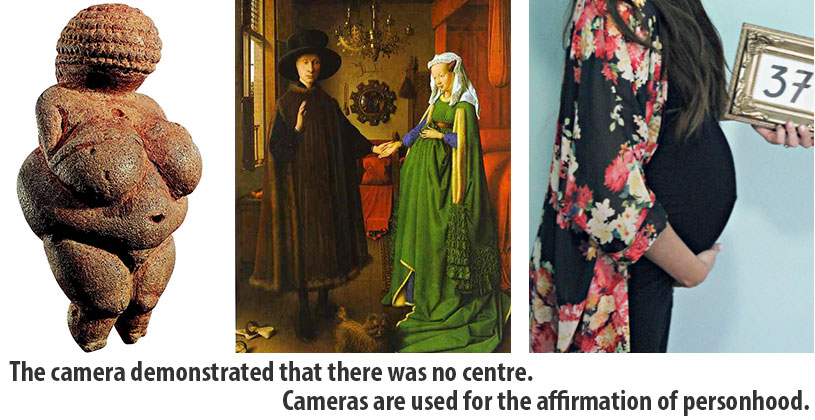 THE AURA AND THE SPECTACLE

Walter Benjamin discusses the idea of the aura at length in his essay “The Work of Art in the Age of Mechanical Reproduction.” The uniqueness of a work of art, its authenticity, is called into question when the process of reproduction is so simple. Benjamin said that through reproduction the “total function of art is reversed” and it becomes based on politics instead of ritual.

We try to get ourselves closer to an object through its reproduction. What does that do to the original? I have a “Degas” and an “O’Keefe” at home. Benjamin says the decay of the aura can be attributed to “the desire of contemporary masses to bring things ‘closer’ spatially and humanly, which is just as ardent as their bent toward overcoming the uniqueness of every reality by accepting its reproduction.”

Once we frame art in that way, it’s no big leap to get to Guy Debord’s concept of “the society of the spectacle,” where a consumer society is organized around the consumption of images. Take Instagram, for instance. We’ve gotten caught up in this fetishism of culture in which our social connections rely heavily on images and reproductions, many put forth by those more glamorous than us. How else to explain Kim Kardashian’s wedding photo, which garnered 2.4 million likes? 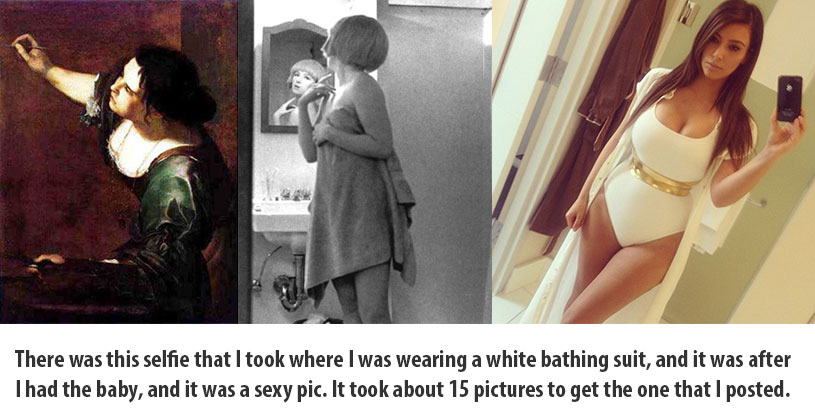 From Deboard’s essay, these three points have modern-day relevance, as we construct our reality around the world as we see it through our phone display:

1:In societies where modern conditions of production prevail, all of life presents itself as an immense accumulation of spectacles. Everything that was directly lived has moved away into a representation.

4: “The spectacle is not a collection of images, but a social relation among people, mediated by images. The spectacle, grasped in its totality, is both the result and the project of the existing mode of production.”

42: The spectacle is the moment when the commodity has attained the total occupation of social life. Not only is the relation to the commodity visible but it is all one sees: the world one sees is its world.

THE PUBLIC SPHERE AND THE SELFIE

It is no accident that the portrait was the focal point of early photography. – Walter Benjamin

We use photography to construct our reality (and not so much reflect it) now. My parents kept photo albums documenting births, birthdays, vacations, and holidays; I share the mundane aspects of my life via images on Facebook, Instagram, and a blog. With a few simple steps, I am able to create a distorted reflection of my life to the world. What touching thighs? Of course, this isn’t a new concept, just one that is easily done, without a second thought. As Van Dijck points out, this pictorial manipulation has become the default mode.

There’s an entire industry built around photo retouching that goes beyond just smoothing stray hairs and zapping pimples. In many cases, as advertised, it renders a person unrecognizable.

Ron Burnett called digital photographs “simple raw material for an endless series of digressions.” I agree, thinking of them as a starting point for creativity and re-invention and not static galleries. But here’s also where things get a bit sticky: If I see digital photographs as these malleable images, what does that say about my identity, or lack thereof?

Is this artificiality leaving a false imprint that distorts more and more as time stretches? Will I be able to recognize myself in that moment again? I think back to that Glamour Shot. I had no real control over the image, in fact, every part of that process was staged. But in that photo is a memory of “life as it was” for me. Was it my identity? As much as any other photo of me was, and is, and wasn’t, and isn’t.

I’ll end with another quote from Horkheimer and Adorno, which I think gets at the tension  in photography, and that’s the struggle to find that identity amid the baggage of history:

“The moment of the work of art by which it transcends reality cannot, indeed, be severed from style; that moment, however, does not consist in achieved harmony, in the questionable unity of form and content, inner and outer, individual and society, but in those traits in which the discrepancy emerges, in the necessary failure of the passionate striving for identity.”

View all posts by Jenn Godwin

#nationaldaughtersday I never imagined it would be this perfect. I am forever grateful to get to call myself her mom.
Oh, to be part of her world is such a beautiful thing.
Satchmo is a superstar! He had his big debut on Bluff City Life to encourage dogs and their human companions to come out to Whet Thursday at the Metal Museum on Aug. 25.
The ocean called us, and we answered.
Where in the World is Abby Sandiego?
First time watching a movie at the theater. Mini Boss ❤️ it!
Join 41 other followers